In April 2012, conservationist John Varty was attacked by one of the tigers that he is working with at the Tiger Canyon conservation project. The attack and John's subsequent newsletter regarding the attack have resulted in a huge amount of feedback and questions concerning the tiger, Corbett's, future. After receiving so many angry, caring and passionate emails, messages on his blog, twitter and Facebook, John now feels positive about Corbett's future. 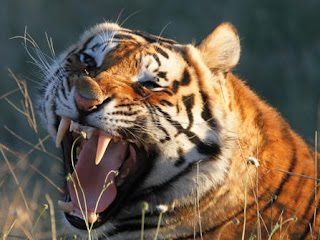 During his convalescence following the attack, John has had time to decide what to do about this extremely aggressive tiger, and has come up with the following solution:

If you would like to contribute to Corbett's boma, you can do this through the Savannah Fund (see below).

In addition, an auction will be held in Johannesburg to raise some of the R3 million that is required for this project (details will follow).

1) The highlight of the auction will undoubtedly be a life size bronze statue of Corbett. Well-known artist John Bassi is working out the logistics of how to create this magnificent bronze which will weigh 300 kilograms.
2) Also on auction will be 15 of the best photos by Daryl and Sharna Balfour, Lorna Drew and Yvette van Bommel.
3) Safaris from well known lodges will be auctioned: two big cat safaris will go under the hammer.
4) For any collectors, replicate jackets of the one John Varty wore, which gave him protection against Corbett's teeth, will be auctioned.

John's new book "Hand Brake Safari - A Journey with Tigers" will also be launched at this event. Written with humour, it tells of the last 12 years of tiger conservation. The blood, the sweat, the tears, the joy, the sadness and, of course, the attack.

If anyone has anything of value, a painting, an art piece, a herd of blesbuck, a sable bull antelope, anything that has value that can be auctioned, please contact Sunette (info@jvbigcats.co.za)

The final details of the auction are to be confirmed, however June first at 6pm in Johannesburg has been targeted.

More information on the amazing Tiger Canyon project, and a background on Corbett and the other tigers that live there, is available on John Varty's website, or you can him at info@jvbigcats.co.za