The news has broken that the Indian Government is far down the tracks with legislation that will ban tourism from their parks.
I should be overjoyed, because all that tourism now becomes available to Tiger Canyons. However, I'm not, I'm bitterly disappointed.
Already professional and amateur photographers are streaming into Tiger Canyons because their last trip to India has been hugely disappointing.
One group waited for a decent shot of a tiger for three weeks and got none. Another group found a tiger in tall grass surrounded by seventeen cars. After 15 minutes, without ever seeing the tiger, a rude government official told them to leave.
Infuriated, they cancelled their Indian Safari, came to Tiger Canyons and shot 4 000 images in three days. 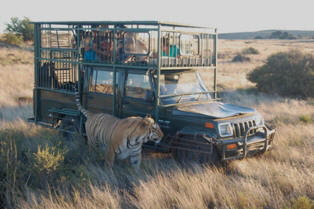 Unless you are Ted Turner, Richard Branson or Lakshmi Mittal, you cannot think of trying to save an animal like a tiger unless you have a reliable and extensive source of income. That income comes from tourism.
The original Mother Leopard at Londolozi who spurned the leopard industry in the Sabi Sand, was photographed over a million times. I personally shot two million feet of film of her and her nineteen cubs.
Tigress Julie has starred in three TV series which have reached a global audience in 180 countries worldwide.
The simple fact is that Mother Leopard and Tigress Julie are ambassador, icon cats. They are highly viewable and are renewable resources being photographed time and again throughout their lives.
If a balance sheet was constructed, they would surely sit under the asset column at millions of dollars.
So why would the Indian Government take a decision which cuts off the income that is crucial for saving the wild tiger.
This excellent article throws some light on why this extraordinary decision is pending.

Tourism ban will not help the Big Cat

http://www.thehindubusinessline.com/opinion/article3687215.ece
Ninad D Sheth
The Supreme Court’s decision banning tourism in core areas of tiger habitats overlooks several critical considerations. It will harm, rather then help, the cause of tiger conservation.
For a start, it gives way too much power to the forest department. The ban will mean only one agency will both implement the tiger protection agenda, and audit that process.
The various forest and environment officials at the Centre and at the State level have a terrible record of tiger protection. They had held up the absurd number of 5,000 wild tigers in India till recently when it was already clear to every one (including the much maligned lodge owners) that there are only about 1,500 tigers left in India.
Tellingly, the two parks from where the tiger completely disappeared due to poaching were Panna and Sariska and both were not in the top ten most visited by tourists. In contrast, parks with the highest tiger density, such as Ranthambhore and Corbett, are amongst the most visited In India.
In both Panna and Sariska, the forest officers went to great lengths to deny that the parks were without a single big cat. The unscientific relocation in Sariska has been a double disaster. These are the very people who will run tiger parks across India, if the new order is implemented in its current form.

Tourism allows for ample outside scrutiny of the forest and thus aids tiger preservation. Tourism brings in its wake assessment by lodge owners, guides, photographers and other stake-holders whose survival depends on robust tiger numbers.
Breeding of tigers has been observed with regularity by experts even when the tourism season is in full swing. What is more, no tiger deaths due to tourism have been reported. Forest officer vehicles have, however, caused at least three tiger deaths in national parks of Madhya Pradesh in the recent past.
Poaching for skin and bones and poisoning by nearby villagers remain the two main causes of tiger deaths in India. Incidentally a majority of the poaching incidents, including the latest one in Corbett last fortnight, have happened during the monsoon, when Parks are closed to the tourists.
The Minister of Environment and Forests has proposed dismantling of tourism infrastructure in and near parks within a five-year framework.
Instead, this is the time for the tourism industry as well as the MoEF to draw up a regulatory framework. And hotels that violate norms need to go.

Price it for rarity

At the same time, India needs to understand that the tiger is the rarest of the rare, and access to it should be priced accordingly. The African model offers some lessons. A one-week visit to the Masai Mara, Kenya, during the great migrations costs $3,000 while a week in Ranthambhore or Corbett costs a measly $400 - and the Masai Mara is far cheaper than reserves in places such as Okavango in Botswana.
Raising access fee to national park core area will not only regulate tourist numbers but also provide for far greater revenues for the upkeep of parks and sharing with the local population. This is the one measure that will achieve the desired ends and is also easy to implement on the ground.
To deny future generations that heart-stopping moment - when one sights a tiger in the wild - is no solution. The State’s job is to facilitate this majestic experience through a regulatory approach.
Each park in India has unique issues and will need different solutions. A thought-out policy framework - not an “off with the tourist's head” diktat - is the way forward.

For more information on the amazing Tiger Canyon project visit John Varty's website, or you can Email him at info@jvbigcats.co.za

Posted by Designers on Display at 08:22