Although colored hard-boiled eggs are probably the first Easter food to come to mind, other foods factor into the traditional Easter meals around the world.

Hot Cross Buns are an Easter favorite in many areas. The tradition allegedly is derived from ancient Anglo-Saxons who baked small wheat cakes in honor of the springtime goddess, Eostre. After converting to Christianity, the church substituted the cakes with sweetbreads blessed by the church.

Countries around the world serve sweet cakes in the same vein, such as Czech babobka and Polish baba. The Greeks and Portugese serve round, flat loaves marked with a cross and decorated with Easter eggs. Syrian and Jordanian Christians have honey pastries.

Pretzels were first shaped to indicate the torso of a person with arms folded, praying. 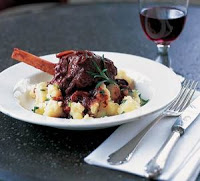 The roast lamb dinner that many eat on Easter Sunday goes back earlier than Easter to the first Passover of the Jewish people. The sacrificial lamb was roasted and eaten, together with unleavened bread and bitter herbs (see Passover Seder) in hopes that the angel of God would pass over their homes and bring no harm. As Hebrews converted to Christianity, they naturally brought along their traditions with them. The Christians often refer to Jesus as The Lamb of God. Thus, the traditions merged.

In the United States, ham is a traditional Easter food. In the early days, meat was slaughtered in the fall. There was no refrigeration, and the fresh pork that wasn't consumed during the winter months before Lent was cured for spring. The curing process took a long time, and the first hams were ready around the time Easter rolled around. Thus, ham was a natural choice for the celebratory Easter dinner.

Whatever your traditions - have a blessed, safe, and happy Easter!
Posted by Designers on Display at 10:00